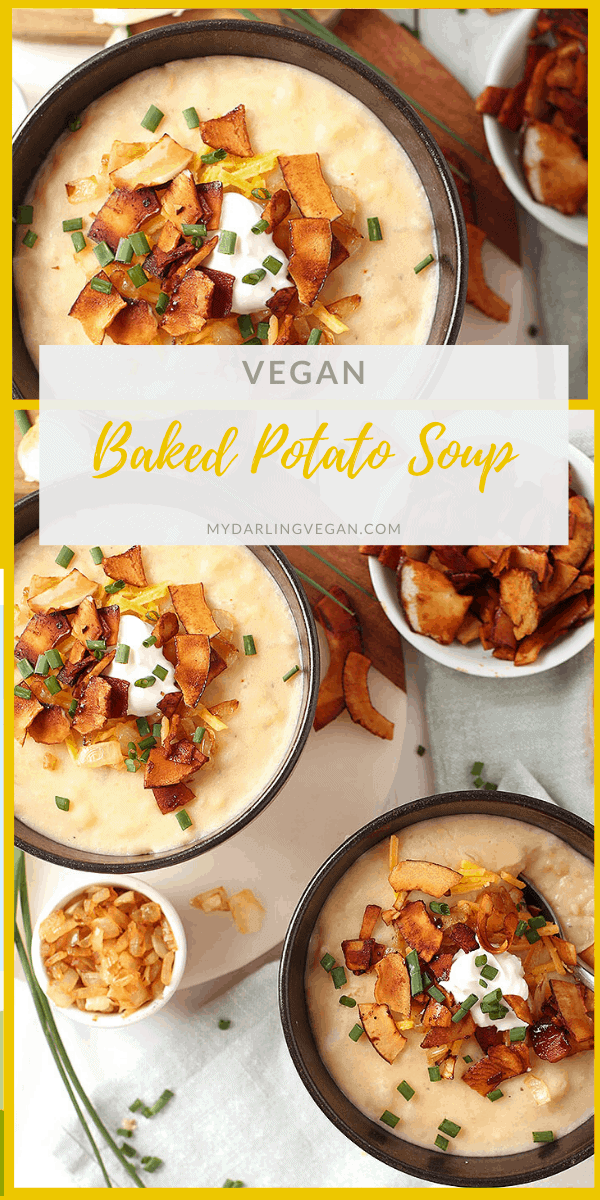 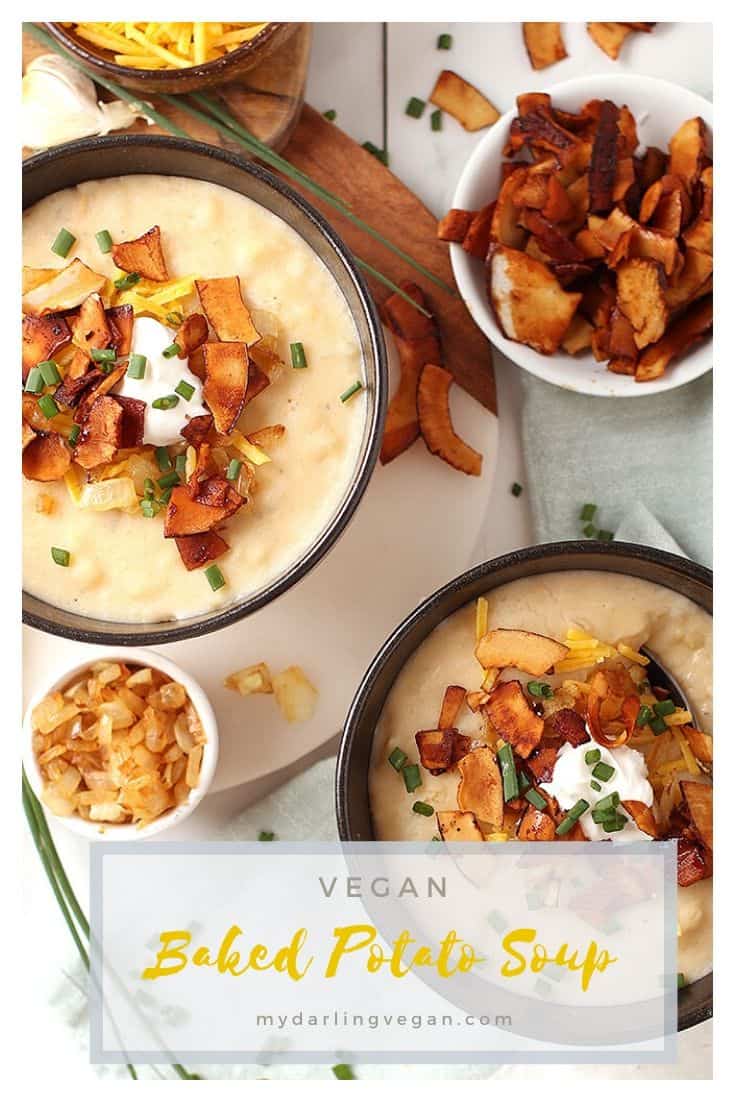 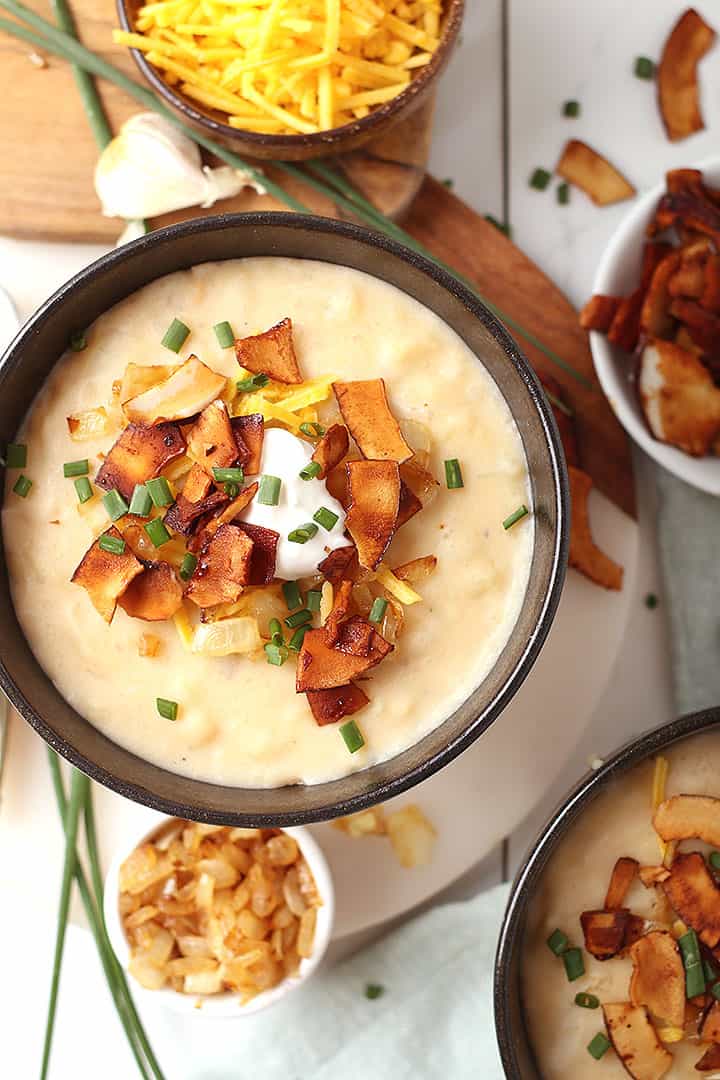 For the past 4 years, I have wrapped up the MDV year with a Christmas eve soup recipe. Here is a look back on the past three Christmas soup recipes:

Ending the year with a vegan soup recipe has become a tradition here because growing up it was a Christmas tradition of ours. Every year was the same (which is what is so incredible about tradition). We would come home from a Christmas Eve service to a lit tree and the festively decorated house smelling of spiced cider and warm soup.

Once the bowls were scraped clean, my mom would bring out the last of the Christmas cookies and we would gather around the tree to open presents. For us, Christmas eve was when the magic happened.

And so, to continue to tradition, I have a new soup for you. It’s a vegan Potato Soup. This soup recipe is warm, comforting, delicious, hearty, AND super easy to make which gives YOU more time to spend with your family this holiday season.

Let’s take a closer at how to make this FULLY LOADED BAKED POTATO SOUP. 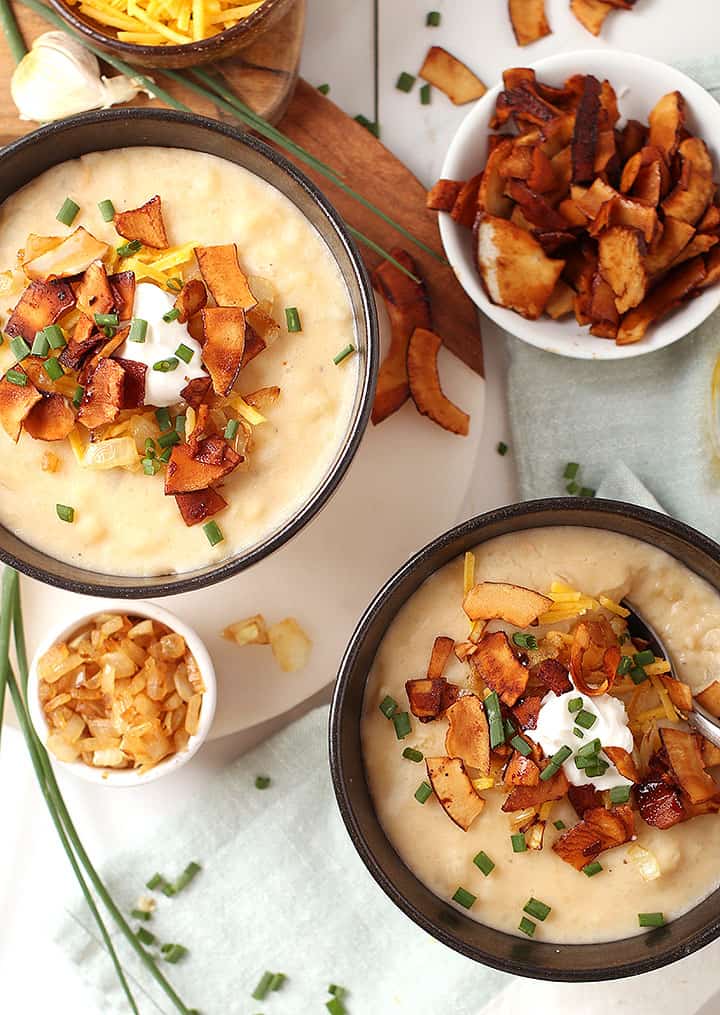 This vegan potato soup is made with just a handful of ingredients that you likely already have on hand. The ingredients include:

Plus optional toppings such as:

If you are garnishing with vegan bacon, you can get store-bought vegan bacon, which you can buy at most well-stocked grocery stores. You’ll find it in the refrigerated section. Or you can also make coconut bacon (which is what I recommend) or eggplant, tofu, or mushroom bacon. 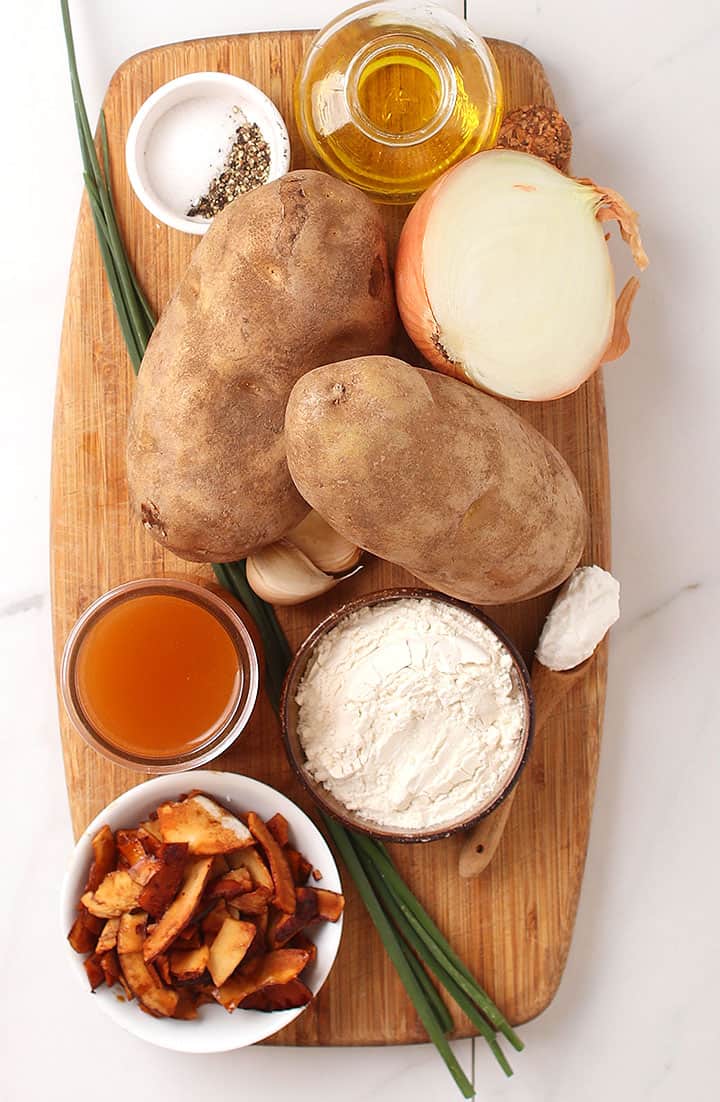 HOW TO MAKE COCONUT BACON

A few weeks back we talked about bacon on the blog and all the wonderful ways you can eat bacon as a vegan.

Among the many foods that can substitute for bacon is coconut chips. Coconut makes a great bacon choice where you need a thin, crispy, bacon-like alternative. Coconut works best when replicating bacon bits for salads, soups, and even pastries. It absorbs the flavors of liquid smoke and maple syrup and crisps up perfectly.

For the garnish of this soup, coconut is my bacon of choice.

Remove the coconut bacon from the oven and allow it to cool to room temperature before using it. 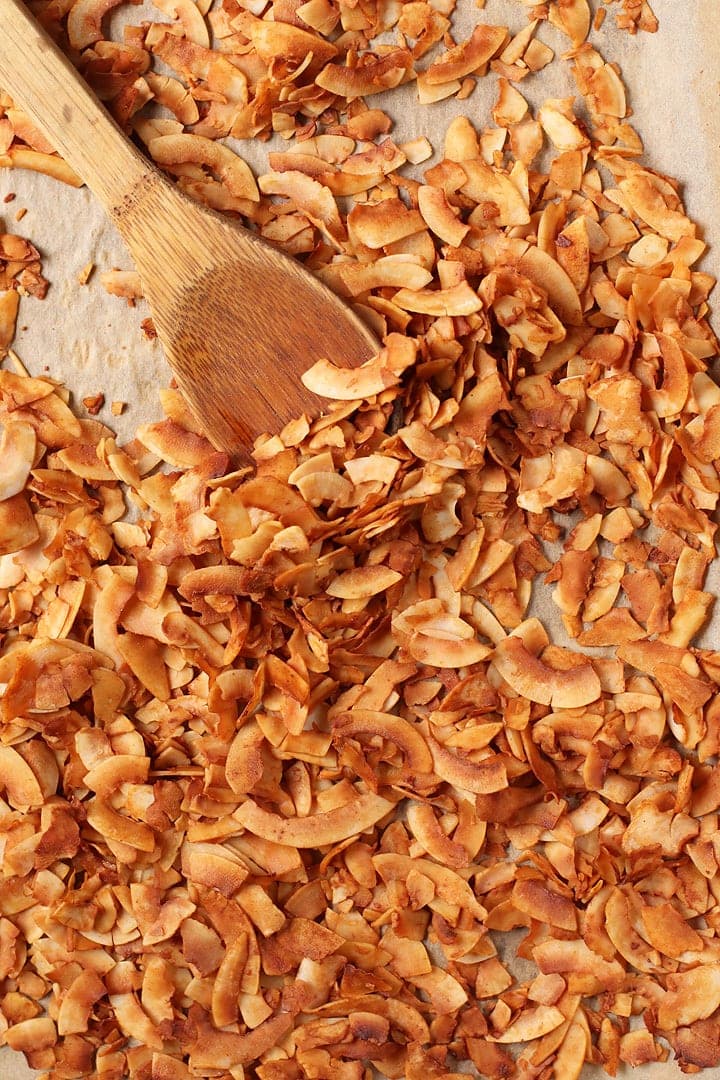 HOW TO MAKE VEGAN POTATO SOUP

This vegan potato soup is super simple to make. Other than the coconut bacon, it can be made in just one pot in under 30 minutes. Let’s look at this step by step.

STEP ONE – MAKE THE VEGAN BACON

If you are making your own vegan bacon, start by making the coconut bacon.

This can be made several days in advance. I like to make a big batch of coconut bacon so that I always have some on hand. It’s the perfect thing to sprinkle onto your salads, soups, and even pancakes.

When it comes to soup pots, I love my Dutch Oven from Le Creuset for soups. Made from cast iron, they are perfect for slow cooking and simmering soups and stews. My Dutch Oven is one of the most useful and versatile kitchen tools I have and although it’s a bit pricey, you will use this one over and over again (for soups, stews, sides, bread, and even desserts!) and it will last you a lifetime.

Plus they come in all different colors! Check them out here.

While any soup pot will do, when I have loved and trusted kitchen items, I like to share them with you.  As a minimalist, I prefer few, high-quality, multi-functional products and I know many of you share that value. Besides, the holidays are upon us and I know some of you are thinking about gifts for your loved ones. 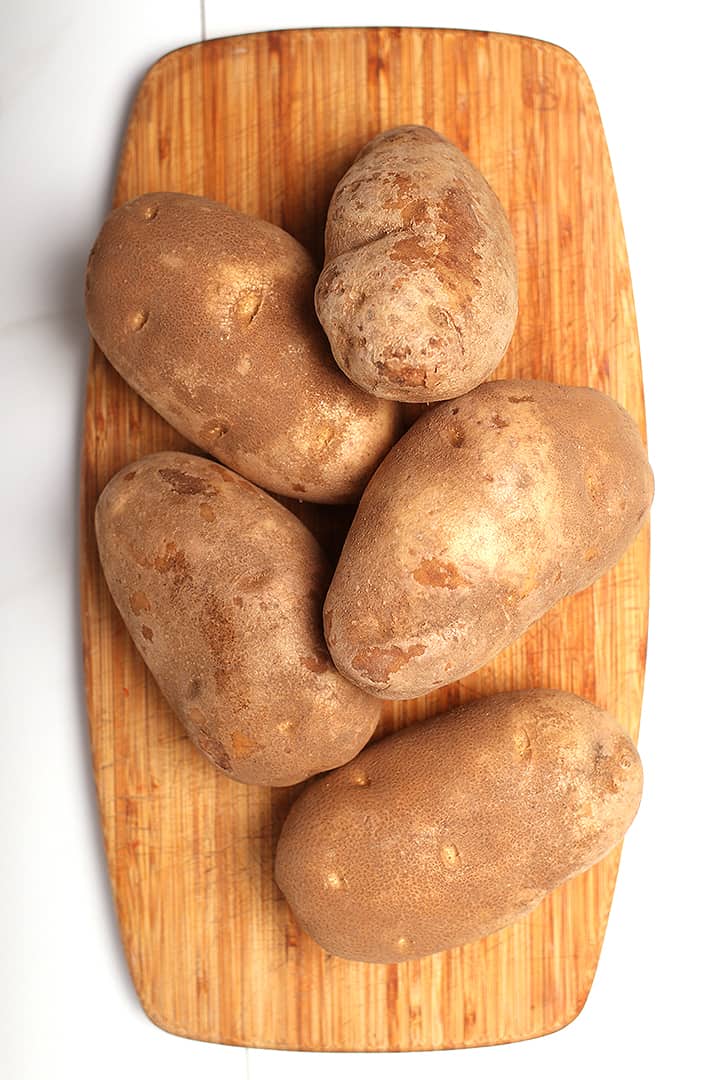 Before we make our soup base, we must bake the potatoes. I choose to do this in the microwave. To microwave, pierce it several times with a fork. This allows steam to escape. Cook them for about 12 minutes, until they are soft to the touch.

If you prefer the more traditional method, you can also bake these potatoes. To bake them, wrap them in tin foil and bake them at 350F for about 60 minutes.

STEP Four – MAKE THE SOUP BASE

In a medium soup pot, heat oil over medium heat. Add onions and garlic and sauté, stirring frequently, for 5 minutes until onions are translucent and fragrant. Stir in the flour, whisking constantly to avoid any lumps. While you whisk, slowly add the soy milk and vegetable broth. Bring to a boil then reduce heat to a simmer. Simmer for 10 minutes, stirring occasionally, until the soup thickens slightly.

Stir in the sour cream and remove from heat.

Add the potatoes, mashing them with a potato masher as much as you like. If you want a completely puréed soup, you can also use an immersion blender. 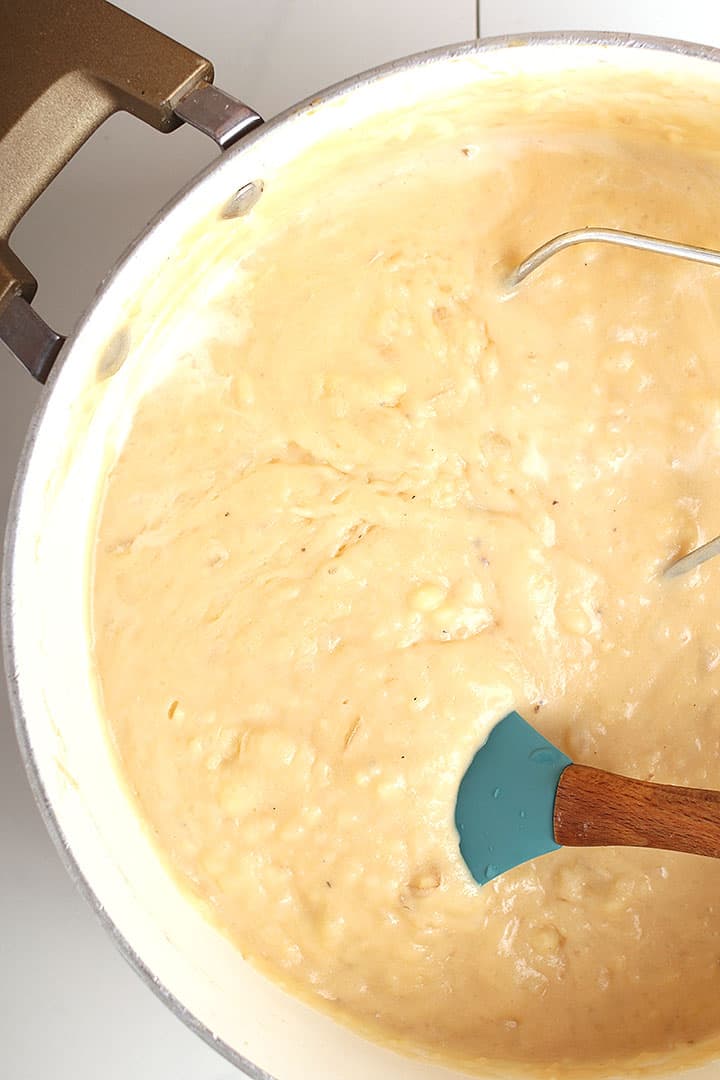 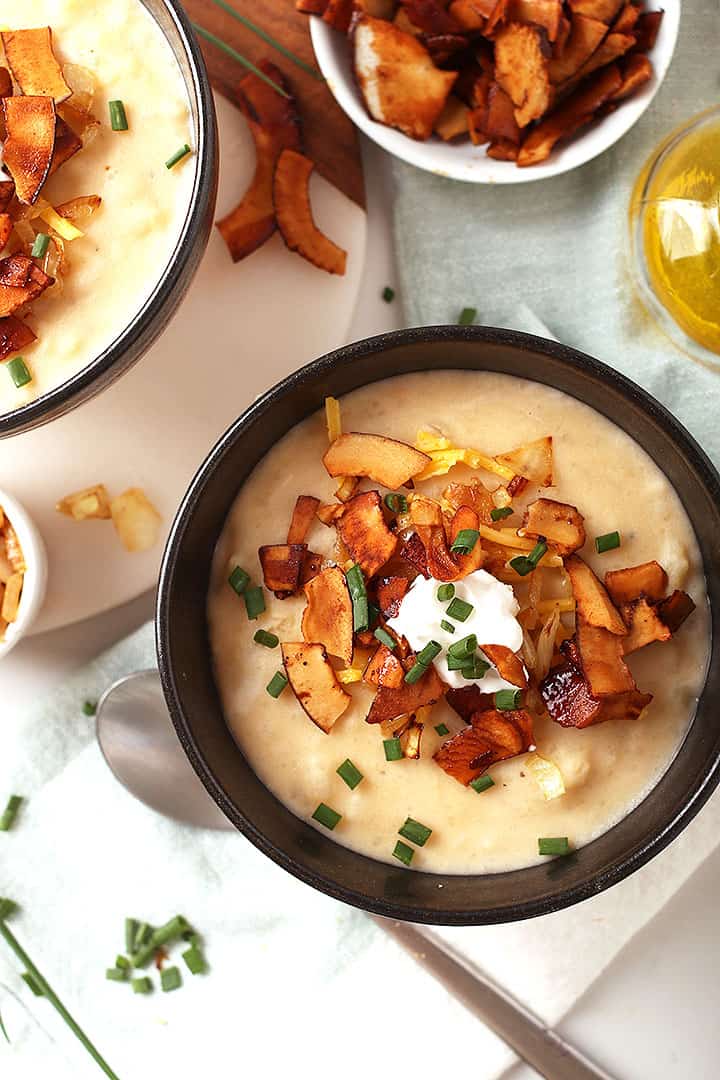 Do you love soup as much as I do? Then make sure to check out these other wildly popular vegan soups.

That’s everything you need to know about making the perfect vegan potato soup. Let’s give it a go! 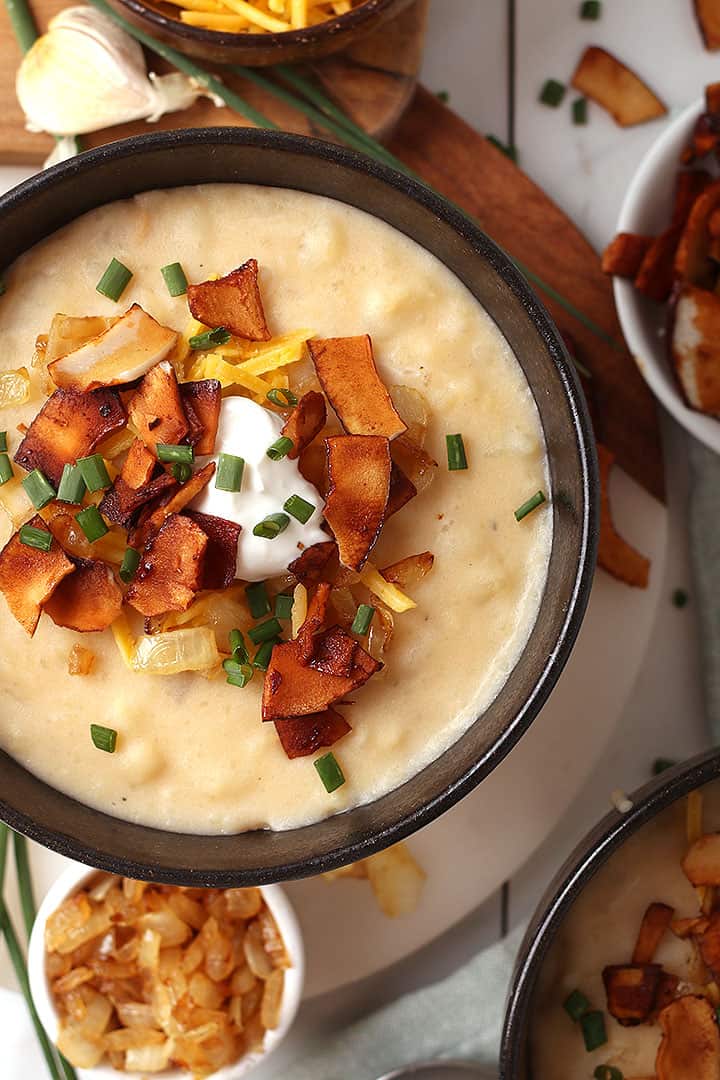 You're going to love this fully loaded vegan Baked Potato Soup. It's a rich and creamy potato soup topped with coconut bacon, vegan cream cheese, caramelized onions, and fresh chives. It doesn't get much cozier than that!