Jump to Recipe Print Recipe
These vegan blueberry muffins are soft and sweet with a hint of lemon and fresh blueberries in every bite for the perfect morning or midday snack. 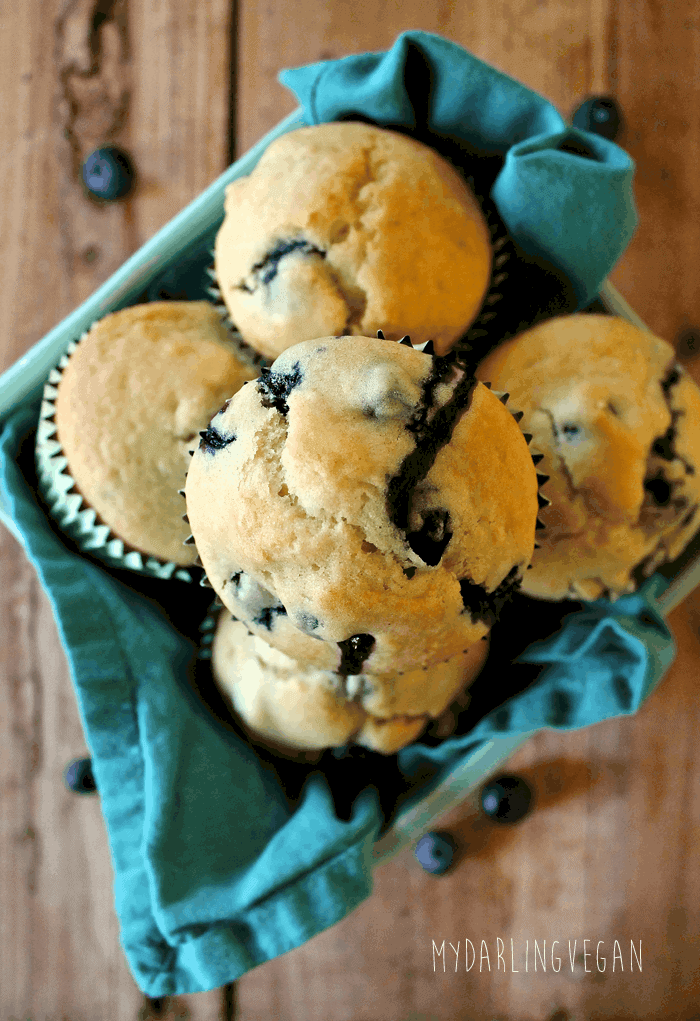 You might already know that for many years between college and staying at home to raise the kids I held various positions as a baker and/or pastry chef in a handful of commercial kitchens. You might also know that somewhere in the middle of my kitchen jobs, I graduated from culinary school and at some point earlier I grabbed a bachelors in photography. What you don’t know – because I have never talked about it here and very rarely in my real life – is that my first job out of college was neither in photography or food. My first position in the working world was as a receptionist at a downtown Chicago law firm.

What do you do when you graduate college with an art degree and a professor telling you that you “probably don’t have a career in photography“, which is very unlucky for you because you have little (to no) practical training in, well, anything? Oh, and did I mention this was 2006 right before everything came crashing down?

You become a receptionist.

It was going to be great, though. In the short summer between graduating college and moving to Chicago I had come to the very certain decision that my future was in law (you know, to do the good stuff) and it was only logical to start working at a law firm while studying for the LSATs.

Was I worried that my ten hours days (including commute) might be a rough transition from the college life?

Was I worried that I would be uncomfortable in this new business professional attire after 6 years of hippie skirts and Goodwill sweaters?

Was I worried that I was taking a job as a receptionist despite my irrational fear of answering phones?

I should have been worried.

I can say with a fair amount of certainty that those were some of the worst months of my life.

I hated everything about the job – the office environment, the “professionalism”, the way that time moved slower than I thought humanly possible, the horribly rude clients that I dealt with on a daily basis. Countless hours of minesweeper and solitaire later (this was also before wifi and smart phones) I left declaring, “I want nothing to do with law, an office, or a nine to five job. Ever again.”

And so I became a bread baker.

My first baking job was the best job I’ve had to this day. Perhaps I remember it so fondly because of the stark difference from the life I had left behind – but regardless of why I fell absolutely in love with the process, the environment, and the practice of baking and patisserie.

When I return to the basics – those things I learned how to make in my first year of baking – like a classic vegan blueberry muffin, I feel immediately transported back into that time of life – back into that wonderful job as a bread baker where I had the honor of working for some of the greatest people, including the women who taught me so much of what I know now.

And so these deliciously soft and sweet vegan blueberry muffins represent so much more than just a simple pastry – they represent the lifestyle that I chose and wholeheartedly love.

Wanna see the recipe in action? Check out the video below!

These vegan blueberry muffins are soft and sweet with a hint of lemon and fresh blueberries in every bite for the perfect morning or midday snack.

53.6Kshares
If you give this recipe recipe a try, snap a photo and share it on Instagram. Make sure to tag @mydarlingvegan so I can see your creations!