Save money and learn how to make a chai tea latte at home! A warm and spicy spiced tea blended with frothed milk for only a fraction of the price! Made in under 10 minutes. 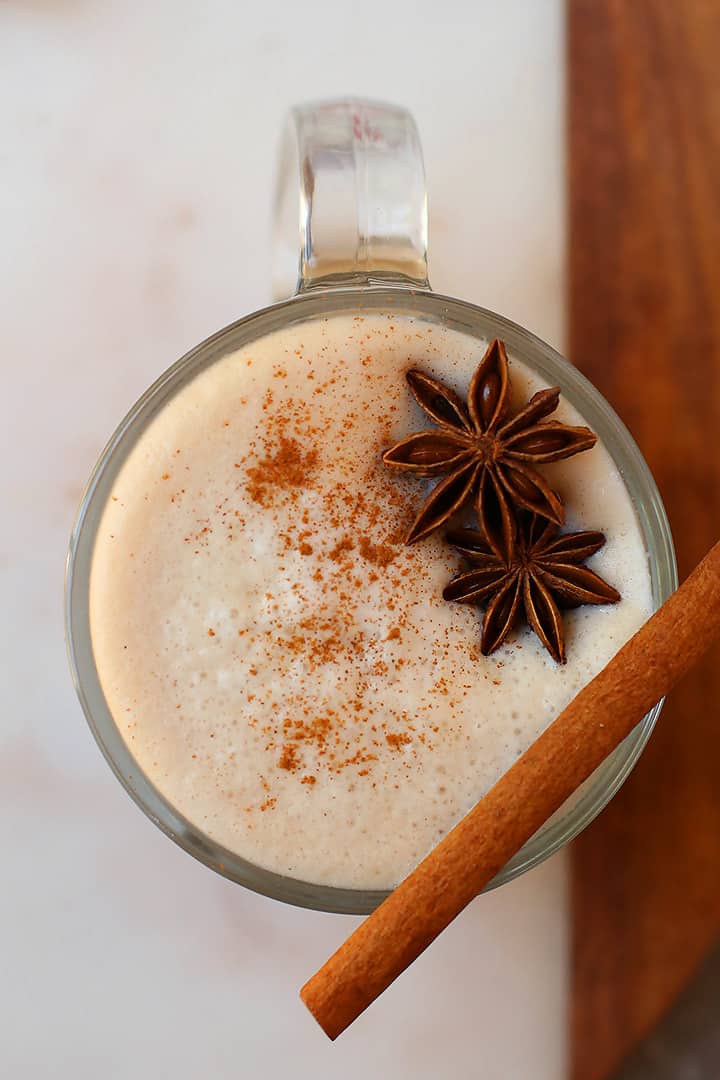 My, how things have changed.

This How to Make a Chai Tea Latte post was originally published in 2012! Back then I had only one child, was still married, and, the biggest shocker of them all, I STILL DRANK COFFEE! At the end of the post, I admit that my go-to drink was a quad-soy latte and chai tea lattes were my afternoon delight. 6 years later, I can barely handle caffeine in any form so it’s herbal tea for me, please.

But now that it’s fall, I have been hard-core craving chai tea lattes. Without caffeine in my life, what was a girl to do?

Rooibos, my friends. The answer is Rooibos. 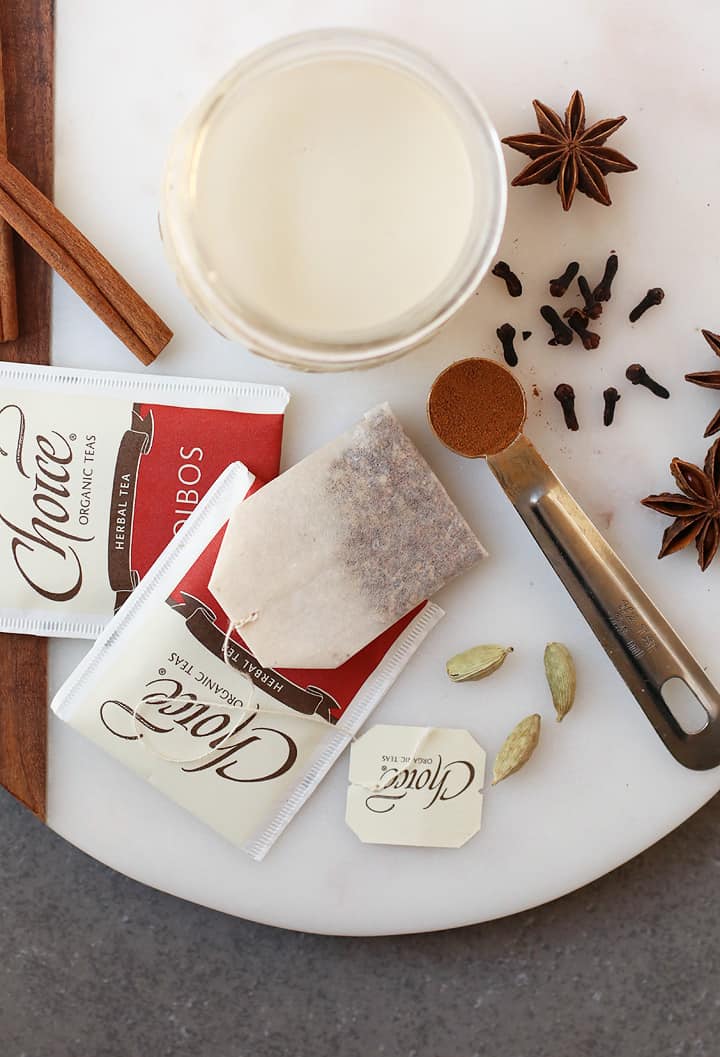 Rooibos, or red bush tea as it is commonly called, is an herb that comes exclusively from South Africa. It has been around for the past 300 years but only recently gained popularity as a tea. Rooibos has smoky, sweet, and vanilla flavors that pair deliciously with the spices commonly associated with chai tea.

Rooibos is not only delicious, but it also has many health benefits. As someone who cannot drink caffeine I find Rooibos tea the perfect alternative.

And so, if you are looking for a caffeinated Chai Tea Latte, an unflavored black tea is the way to go. Which, you’ll be happy to know, has it’s own many health benefits. 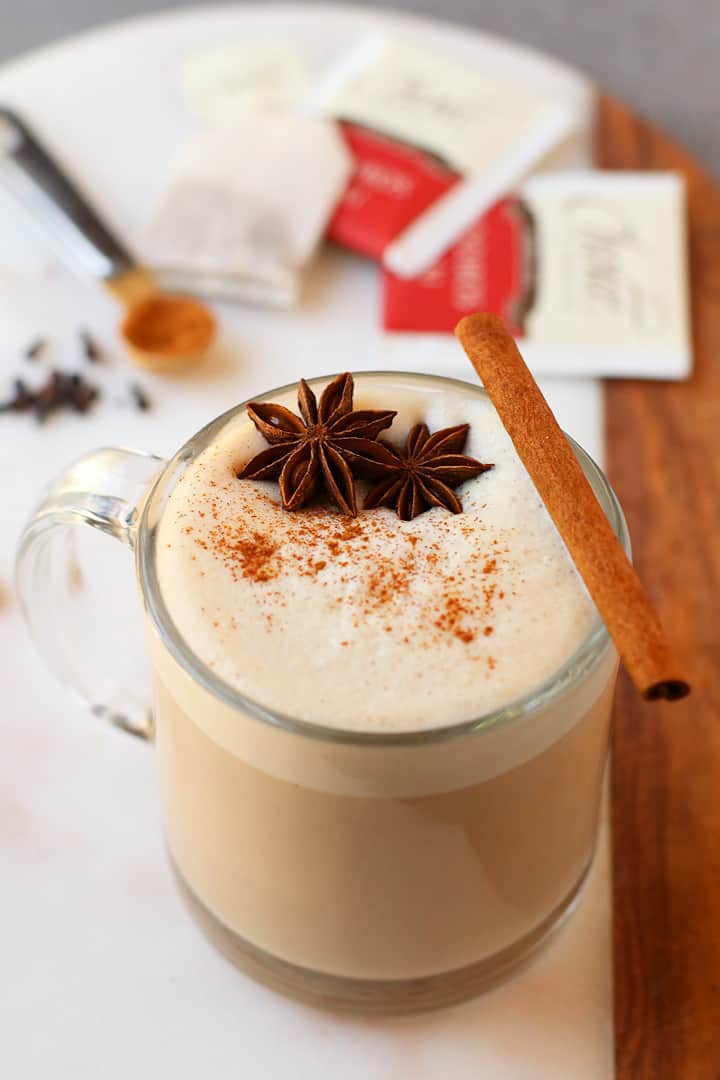 How to Make a Chai Tea Latte

There are several ways to make homemade chai lattes. I have tried many over the years. Over time I have developed a tried and true chai tea latte that I think you will love!

Step One: Choose your spices

Once we’ve picked out our tea – it’s an important decision, my friends – we can start making our chai tea latte. In addition to tea, I like to use whole spices that get steeped with tea for a full flavored experience.

My go-to spices are:

Sometimes, I’ll also add grated ginger into my tea (just throw it in with the spices) if I’m looking for a little extra zing. The spices are very flexible in this recipe, so mix and match as you please.

With your tea and spices picked out, the next step is to boil and steep them in 1 cup of water. You are essentially making a chai tea concentrate. If you know you will be drinking a lot of chai teas this fall and want to be efficient, double or triple the batch and store your chai tea concentrate in the refrigerator for up to two weeks.

Once your tea and spices have steeped for 5 minutes, pour them through a fine mesh strainer so that just the concentrate remains. 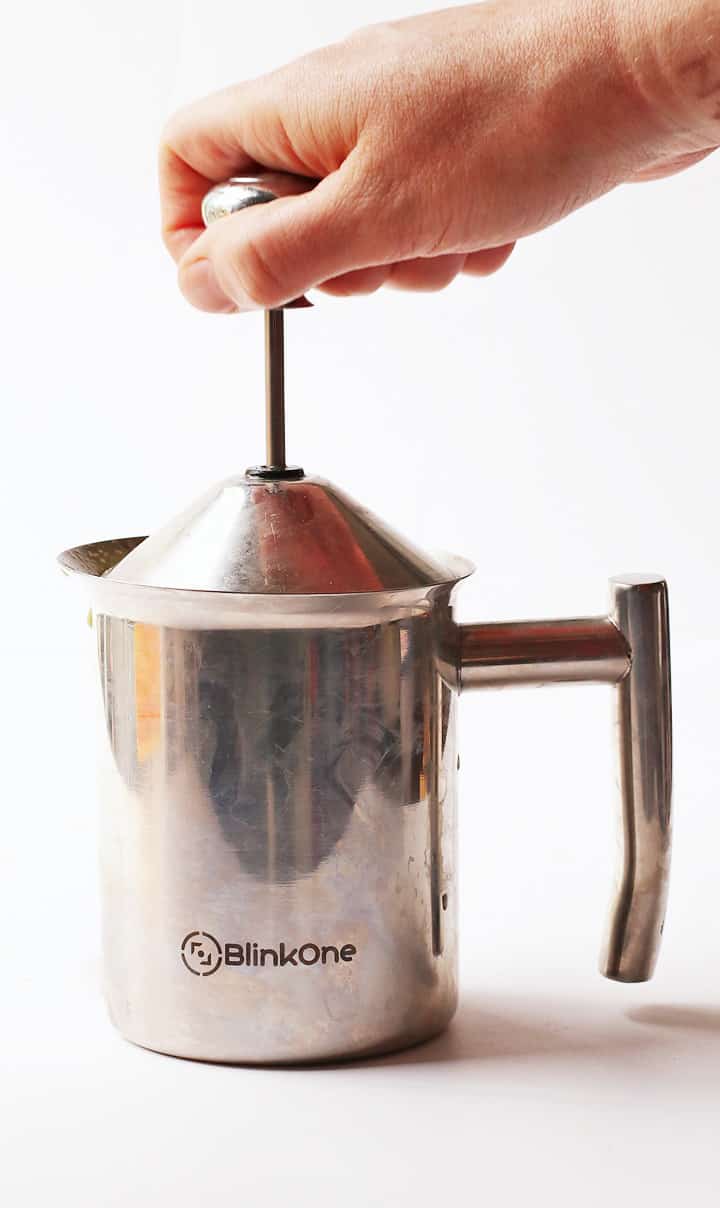 Again, it’s time to make some decisions. What kind of milk goes best with your Chai Tea Latte?

My preference is soy because the flavors blend well with the spices of chai. Additionally, soy milk is one of the best non-dairy milk for frothing. However, if you don’t like soy my other recommendations are hemp, cashew, or oat both for flavor and texture.

To get a nice frothy foam on our milk, I heat it up to a scald, that’s just before boiling point, then transfer the milk to my frother and give it a few pumps.

If you’re looking for a milk frother, this is the that I use. And it’s less than $15 on Amazon!

The milk then gets poured over the concentrate, which mixes all up on its own. Sprinkle your lattes with a little cinnamon and top them with some star anise (because it’s so pretty!) and go on an enjoy your beautiful fall day!

Tips and tricks for perfecting a homemade chai latte

Sound good? Let’s take a look at the recipe card below. 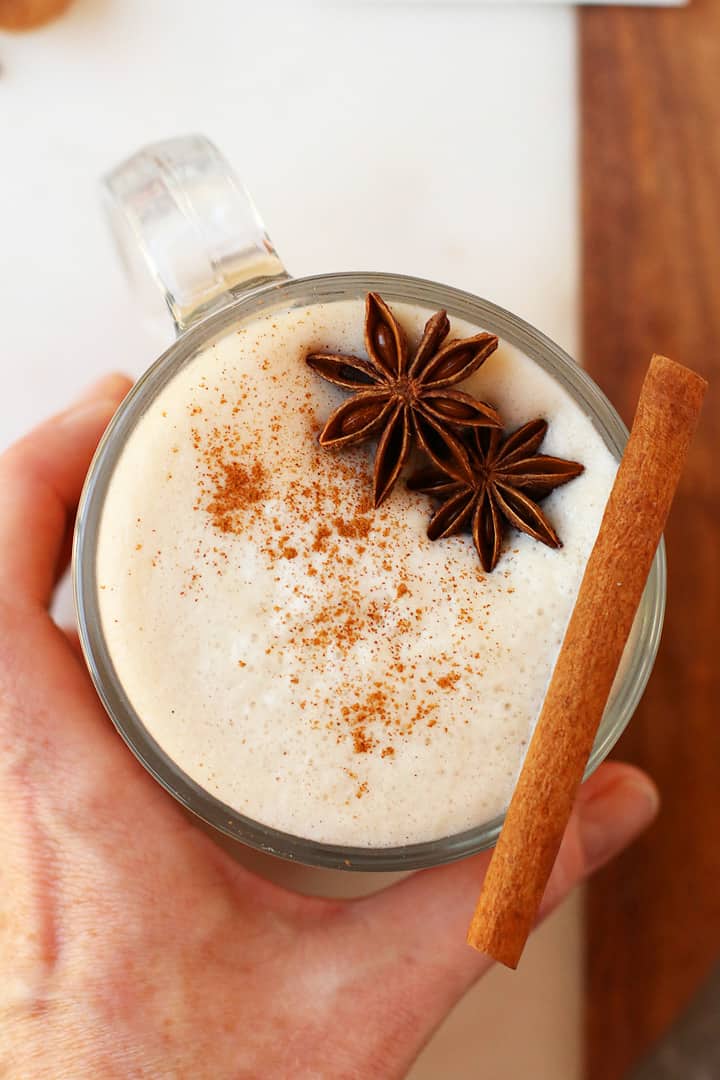 How to Make a Chai Tea Latte

Save money and learn how to make a Chai Tea Latte at home! A warm and spicy spiced tea blended with frothed milk for only a fraction of the price! Made in under 10 minutes.

Black tea is traditional for Chai Lattes, however, I use Rooibos tea for an herbal, caffeine-free option.

If you don't have a manual milk frother, a French Press works well.

Home » Recipes » Beverages » How to Make a Chai Tea Latte