This Moroccan Stuffed Eggplant is bursting with flavor! Filled with lentils, tomatoes, and the perfect blend of spices, this is a vegan and gluten-free meal that elevates dinner to a whole new level.

Ahhh, it’s eggplant season. The most delicious time of year!

You know, there was a time I didn’t like eggplant. I know, I know. It’s absolutely crazy. But I thought the vegetable was soft and slimy, generally without flavor, and altogether gross. Turns out, the problem wasn’t eggplant. The problem was me; I wasn’t cooking it right! Once I started seeing all the vegan eggplant recipes out there, I realized that I was just doing eggplant wrong.

Now that eggplants are finally starting to pop up in our summer gardens, I figured it was time to celebrate this wonderful purple vegetable with a new eggplant recipe. And I think you’re going to love it. 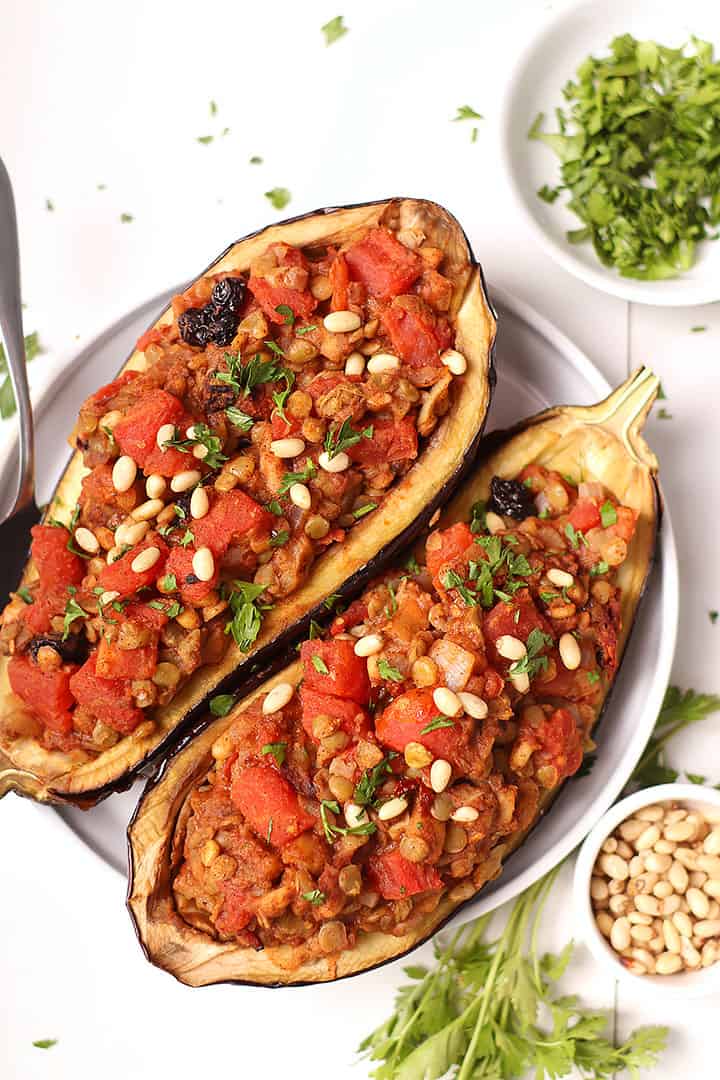 Tips on Cooking with Eggplant

Eggplant can be a tricky vegetable to work with. As I mentioned earlier, when not cooked properly, eggplant can be unpleasant. Here are a few things to keep in mind when cooking with eggplant:

How to make stuffed eggplant

Stuffed eggplant is an easy and satisfying meal. If you’re new to stuffing vegetables, I promise you, it’s much simpler than it looks. Let’s take a step by step look at how to make this Moroccan stuffed eggplant recipe. 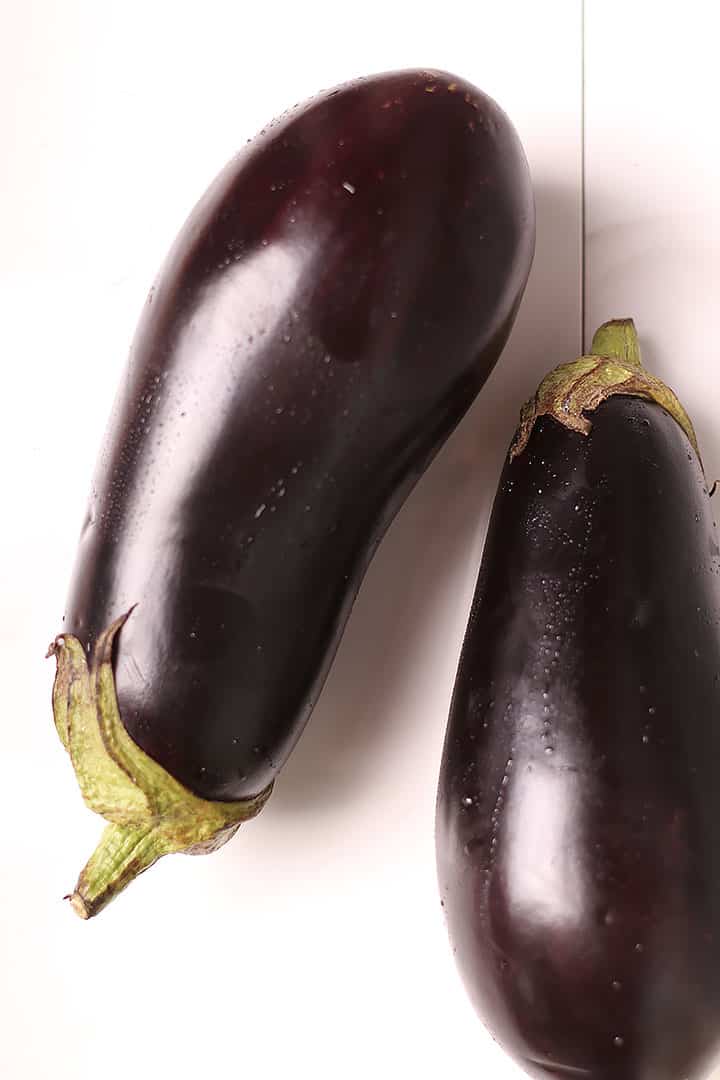 Slice your eggplant lengthwise and scoop out the fleshy middle. You may need to use a paring knife to score the flesh before removing it with a spoon. As you scoop out the middle, keep about 1/2 inch of eggplant around all sides to give it the support it needs for the fillings and toppings. Make sure to reserve the removed eggplant. This will get added to our filling.

Once the eggplant flesh is scooped out, lightly brush the eggplant with 1 tablespoon of olive oil and bake at 400F for 20 minutes until golden brown and tender. 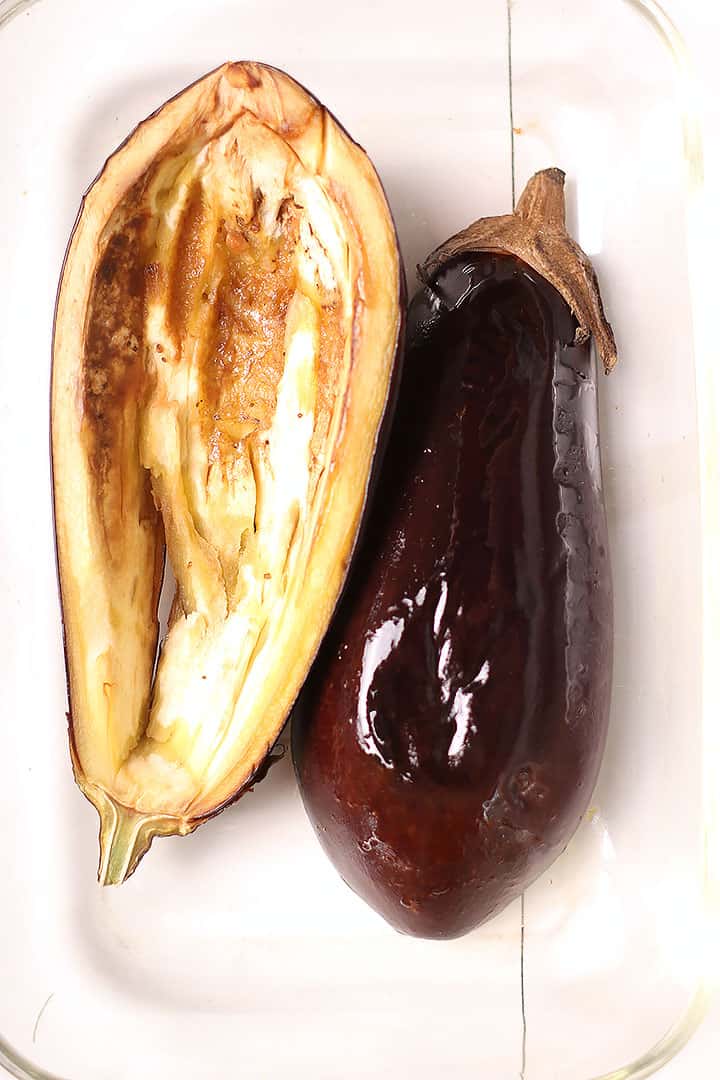 For these Moroccan Stuffed eggplants, I made a lentil-based filling that is stuffed with tomatoes, pinenuts, raisins, fresh herbs, and the perfect spice blend.

To make the filling, first, sauté the onions and garlic. Once the onions are translucent and fragrant, add the pinenuts and cook until they are lightly toasted. Add the remaining ingredients except for the raisins and parsley, and cook for 3-5 minutes until the filling is heated all the way through. Taste and adjust seasonings.

Now, remove the filling from heat and add the raisins and parsley. 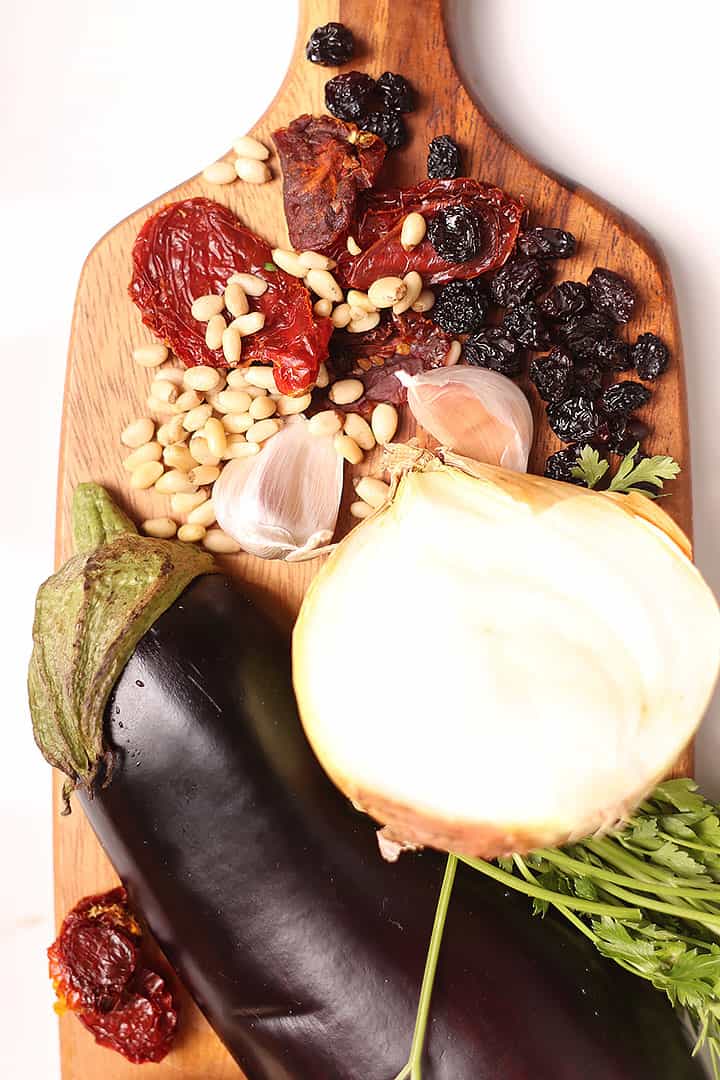 Bake the stuffed eggplant for 10 additional minutes. Remove from the oven, top with fresh parsley, and serve. 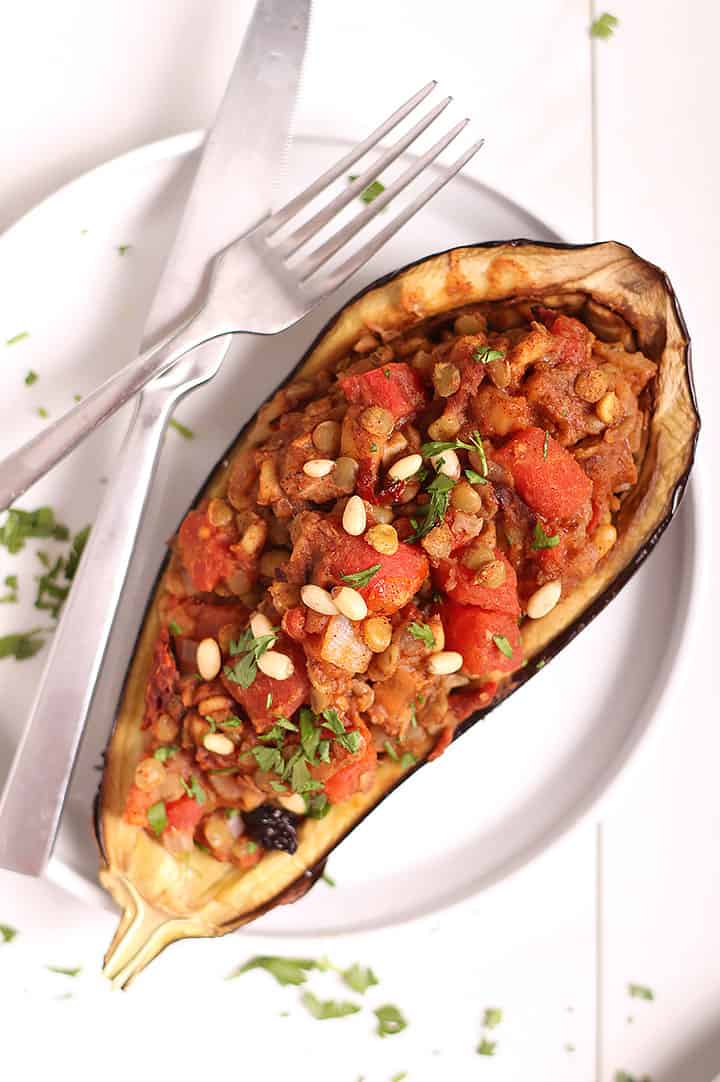 Unfortunately, this stuffed eggplant recipe does not store well. You will want to eat them within an hour of baking. If you are preparing for a larger event and want to work ahead, you can make your filling and place it in the refrigerator for up to 3 days until you are ready to assemble your eggplant. Once you are ready, prepare the eggplant and bake according to the instructions below.

These Moroccan Stuffed Eggplant are good but don’t stop there! Here are some of my other favorite eggplant recipes:

And make sure to check out even more vegan eggplant recipes here. 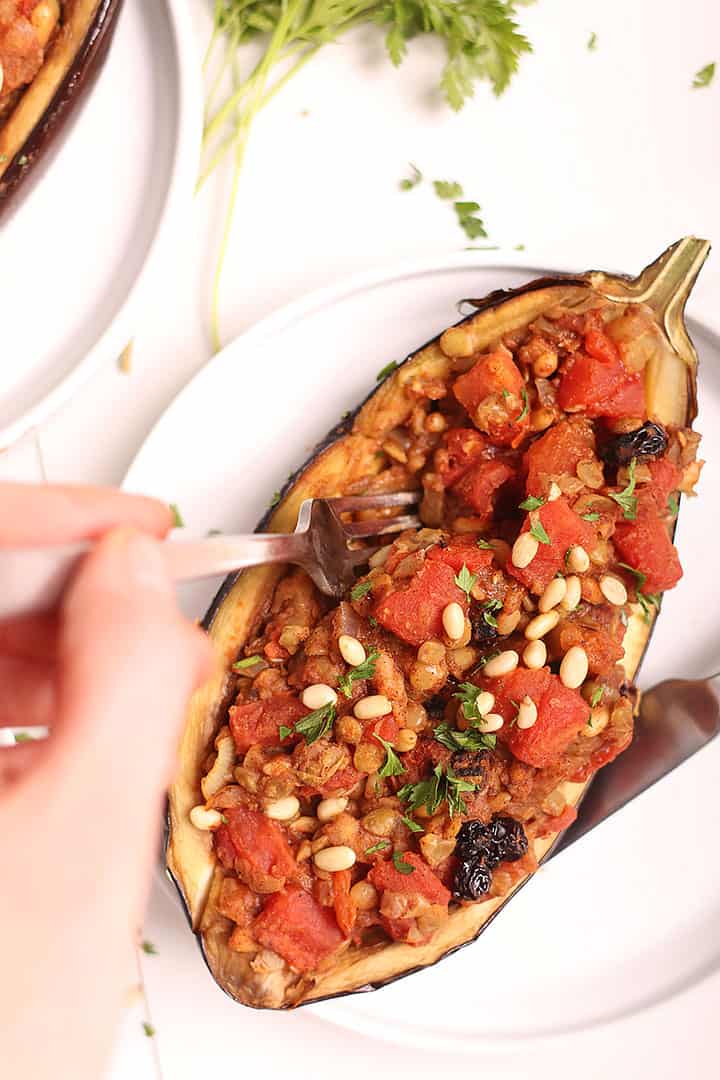 These Moroccan Stuffed Eggplant are bursting with flavor! Filled with lentils, tomatoes, and the perfect blend of spices, this is a vegan and gluten-free meal that elevates dinner to a whole new level.