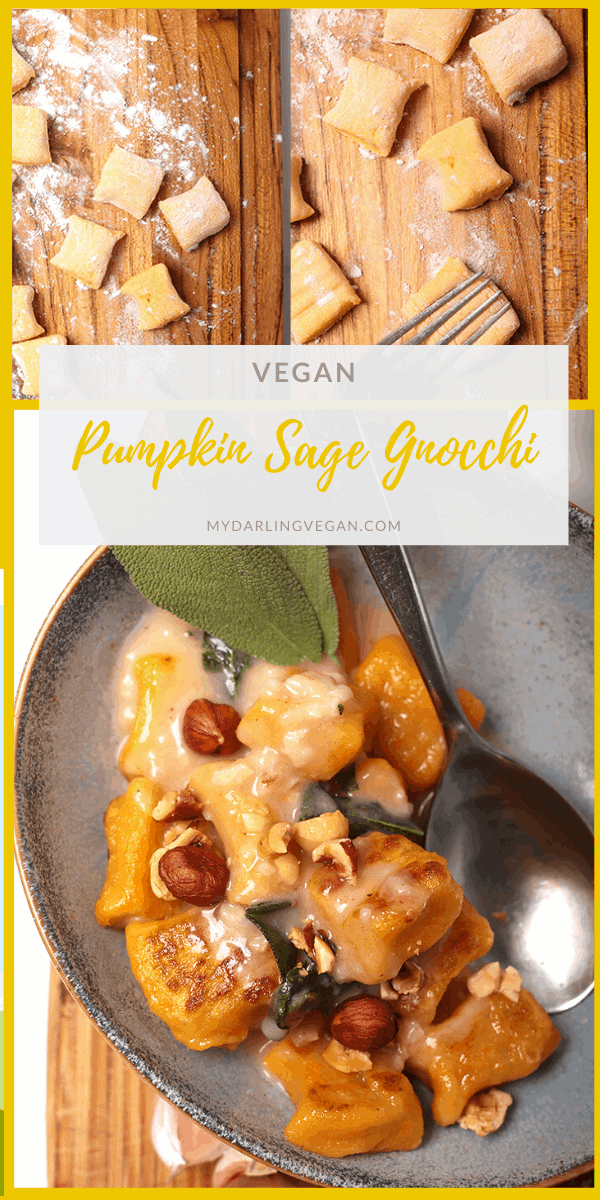 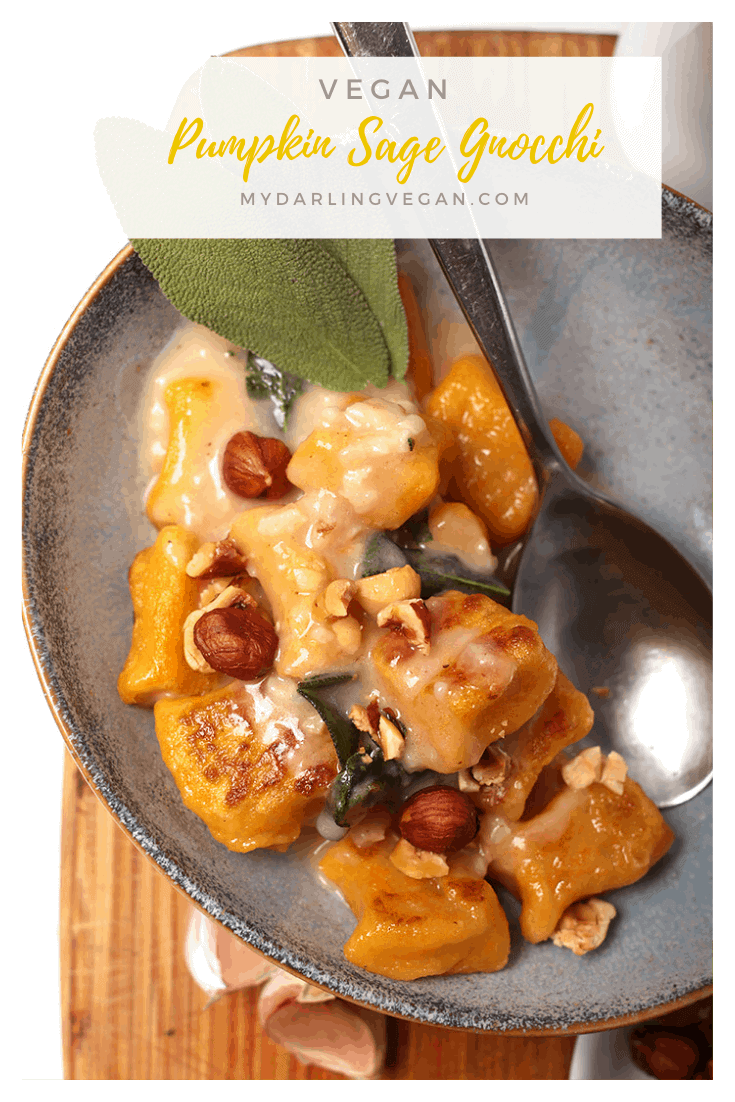 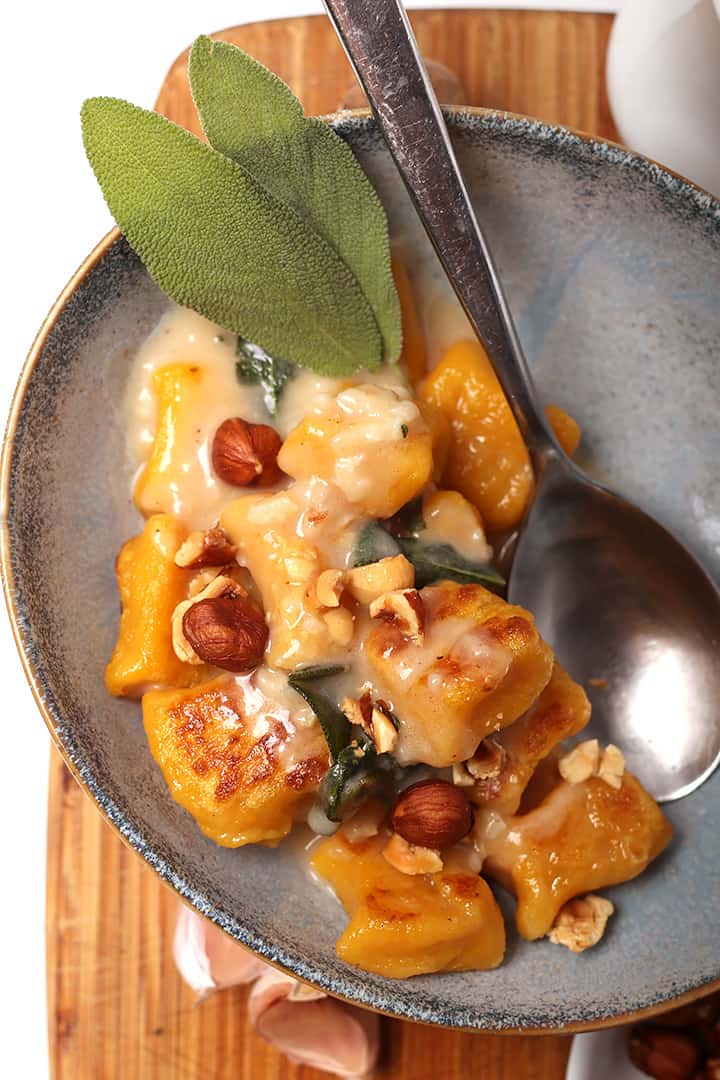 This time I’m bringing you PUMPKIN GNOCCHI? And do you know what’s better than pumpkin gnocchi? Why, pumpkin gnocchi covered in garlic sage sauce and topped with hazelnuts. Now that sounds like the perfect late-October meal, doesn’t it?

This recipe is a marriage between two of my favorite recipes on this blog. It’s my Creamy Butternut Squash Pasta meets my Pumpkin and Ricotta Stuffed Shells made into the form of one of my favorite fall comfort foods – vegan gnocchi!

Friends, I think you, too, are going to love this pumpkin gnocchi. Let’s take a closer look. 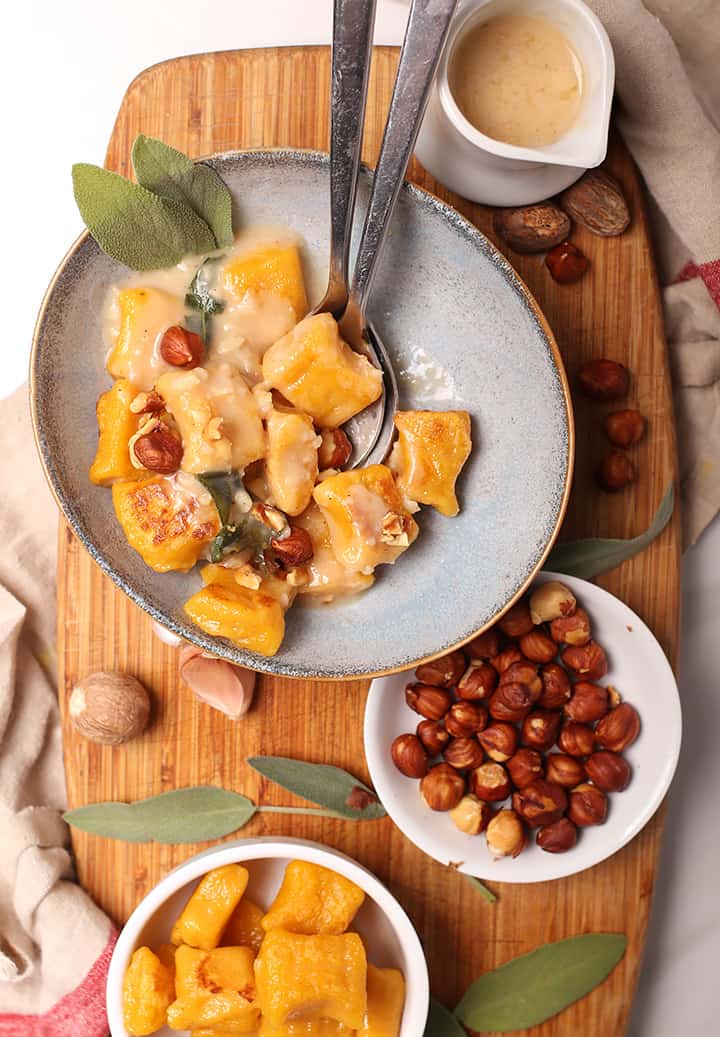 Gnocchi is a popular Italian dish made of boiled cork-sized dumpings. While there are many variations of gnocchi, it is most commonly made from potatoes, flour, and egg. Sometimes cheese, herbs, bread crumbs, and other types of flours are used but most often the flavors are in the sauce. Traditionally gnocchi is served as a side dish to a larger entrée but I prefer it as the entrée itself. When paired with rich, vegetable-heavy sauces, vegan gnocchi is a deeply satisfying meal.

Gnocchi can be bought at the store, but true with all pasta, it is much more satisfying to make at home. And the good news is that gnocchi is much easier to make than one would imagine. The preparation is similar to that of pasta; it’s cooked in boiling water and served with sauce. 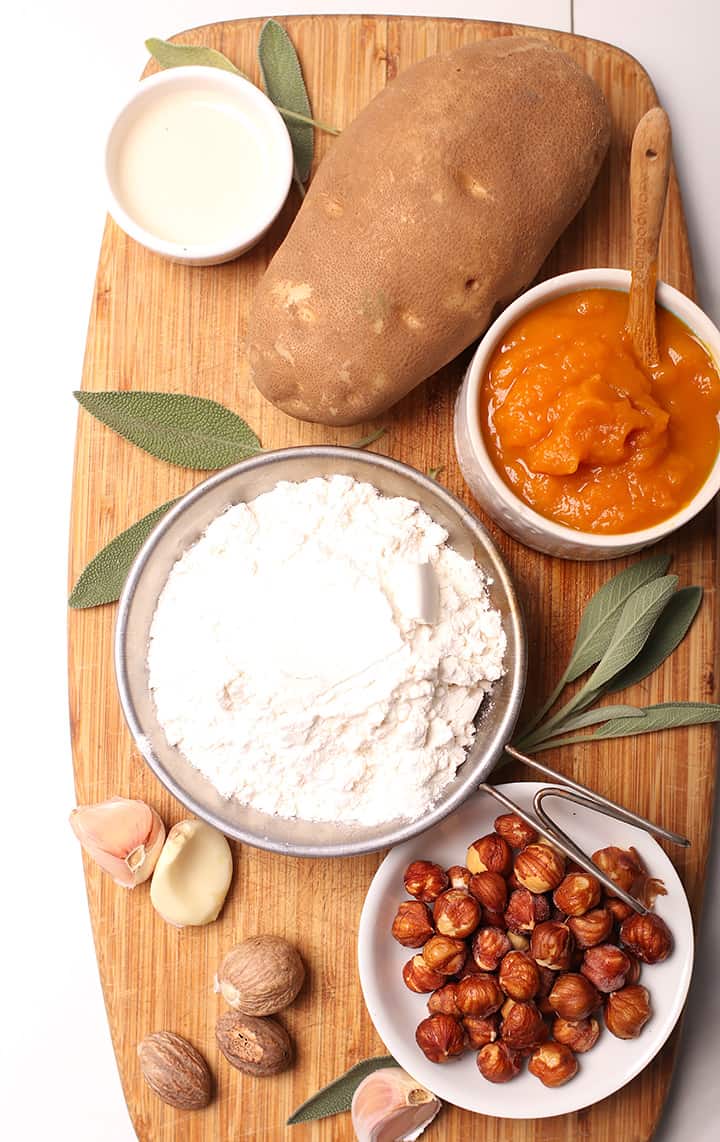 How to make vegan gnocchi

As I mentioned before, traditional gnocchi is made with eggs. So how do we make vegan gnocchi?

To make vegan gnocchi, you can omit the eggs altogether and develop the gluten protein in the flour for a similar consistency with little to no compromise on taste or texture. However, this pumpkin gnocchi takes it to a whole new level. Pumpkin puree is similar in consistency to that of eggs and gives this dough a soft delicate texture that is unbelievable.

Adding pumpkin does make the dough a bit more difficult to work with but as long as you keep your hands and work surface floured, you will love the pillowy-ness that the pumpkin provides.

Step One – Make the dough

Peel and cut the potato into 1/2″ cubes. Place the pieces in boiling water for 10-12 minutes until the potatoes are easily pierced with a fork. Make sure even the biggest pieces are soft! Strain the water through a colander, shaking off any excess liquid, and place the potatoes in a medium-sized bowl. Using a potato masher or large fork, mash the potatoes until they are completely smooth, scraping the sides of the bowl as you mash.

Once the potatoes are smooth, add the pumpkin purée and mix until it is well blended. Add the flour and salt and knead together until a soft dough has formed. You want a dough that is soft without being sticky. 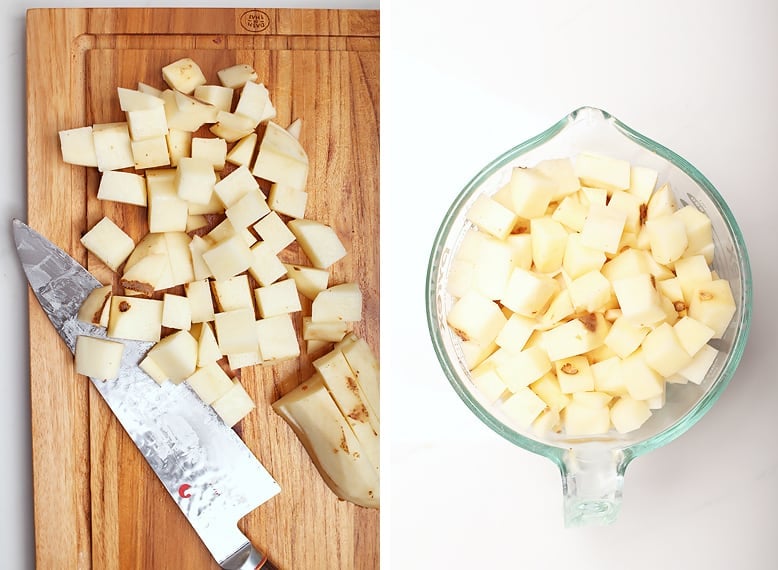 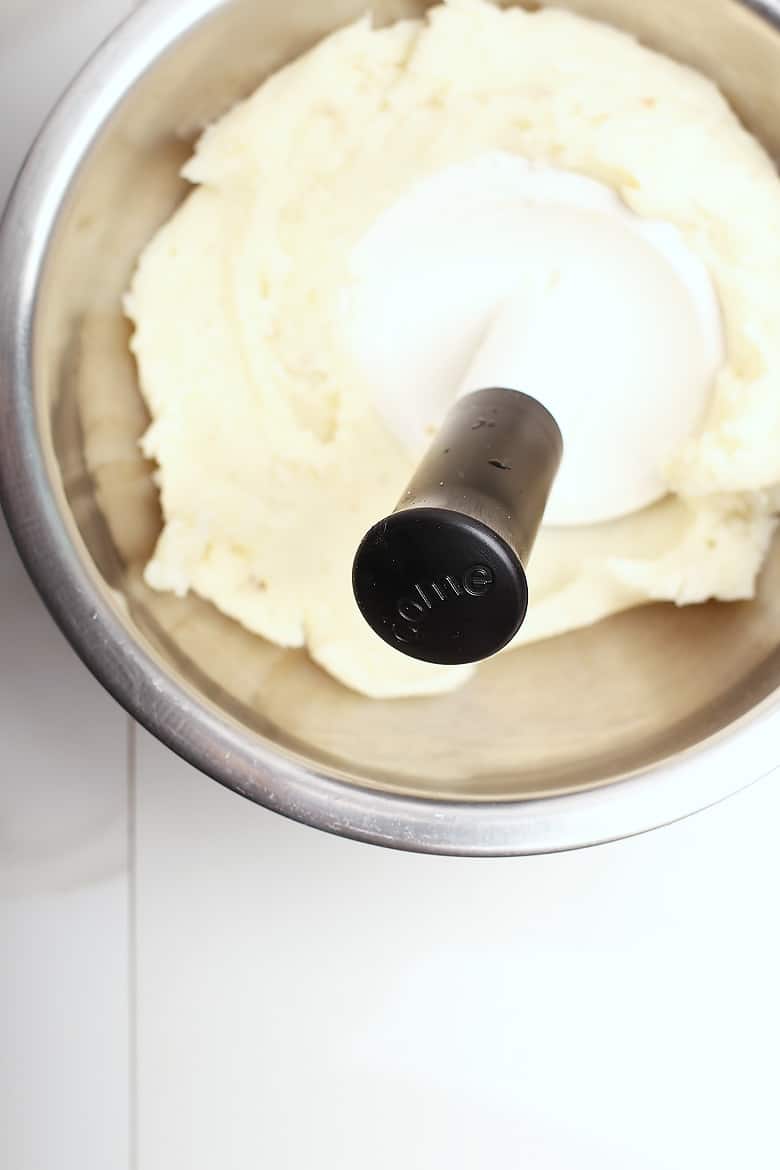 One your dough is made, divide the gnocchi into four pieces. Flip it out onto a floured surface and roll each quarter of the gnocchi dough into long ropes (about 1/2″ in diameter). Using a sharp knife, cut the rope into 1″ gnocchi pieces.

Traditionally, gnocchi has indentations made with a fork or cheese grater. This is to give the dumplings cavities to hold the sauce. If you would like, you can gently press indentations on the front and backside of the gnocchi with a fork, although this step is completely optional.

Pro tip: Make sure to keep the work surface and your hands adequately floured to prevent the gnocchi from sticking. 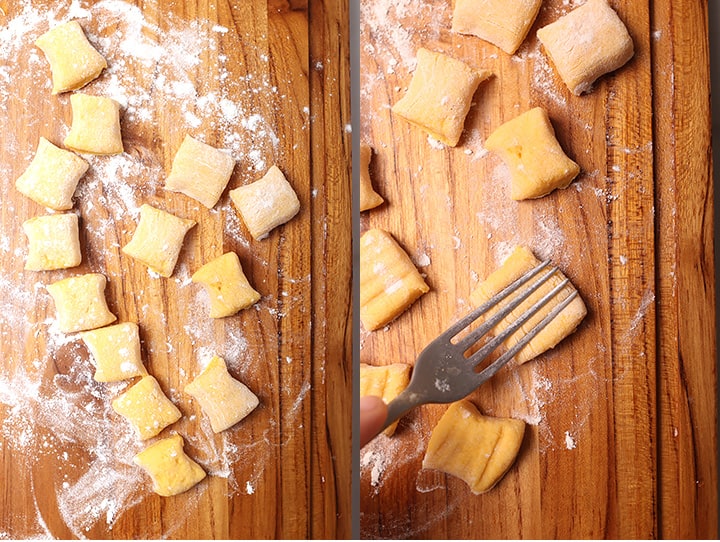 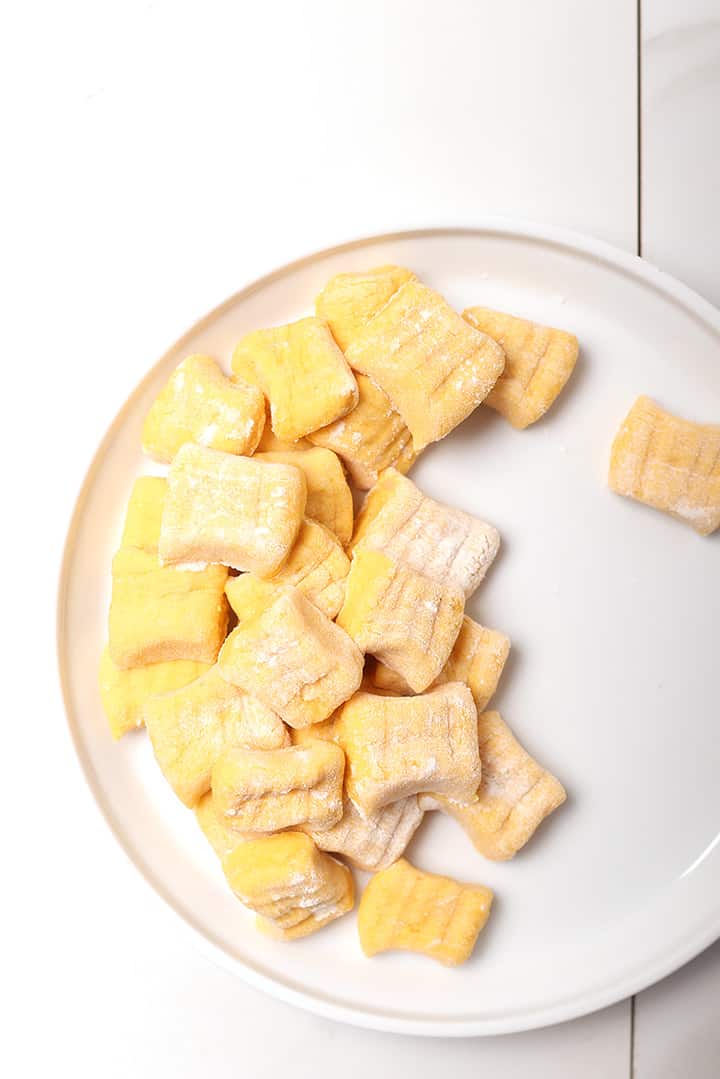 Once the gnocchi is shaped, it is then cooked in boiling water for about 60 seconds. When the gnocchi starts to float to the top of the water, the gnocchi is done. Scoop them out and set aside. Repeat until all the gnocchi has been boiled.

That’s it! A step-by-step guide on making vegan gnocchi at home.

To prepare frozen gnocchi, add it to boiling water straight from the freezer. Frozen gnocchi will take longer to cook but, just like before, look for the first ones to float to the top to know when the gnocchi is done.

If you are going to be eating the gnocchi within a couple of days, you can cook the gnocchi as directed below. Once it’s cooked remove it from the boiling water and place it in a bowl of ice water to immediately stop the cooking and chill the dumpings. Strain and toss with olive oil to prevent the gnocchi from clumping together. Store the chilled gnocchi in an airtight container in the refrigerator for up to 2 days. To serve, simply toss the chilled gnocchi with warm sauce in a saucepan.

Because this recipe requires multi-tasking with the sage garlic cream sauce, I do recommend making your gnocchi in advance.

As you already know, I’m a HUGE fan of Violife parmesan. This is not sponsored content, I just absolutely love this cheese and their parmesan makes this recipe so much better. I first discovered Violife when traveling around England and, friends, it was the BEST vegan cheese I had ever had. It is creamy, melty, and tastes exactly how I remember parmesan to taste. I find their cheeses at Whole Foods but you can also check out this map to find Violife near you.

If you don’t have access to Violife, you can make your own parmesan or omit it altogether.

It’s October which means I can’t help but share all the vegan pumpkin recipes out there. If you love savory pumpkin recipes too, make sure to check out some of my favorites: 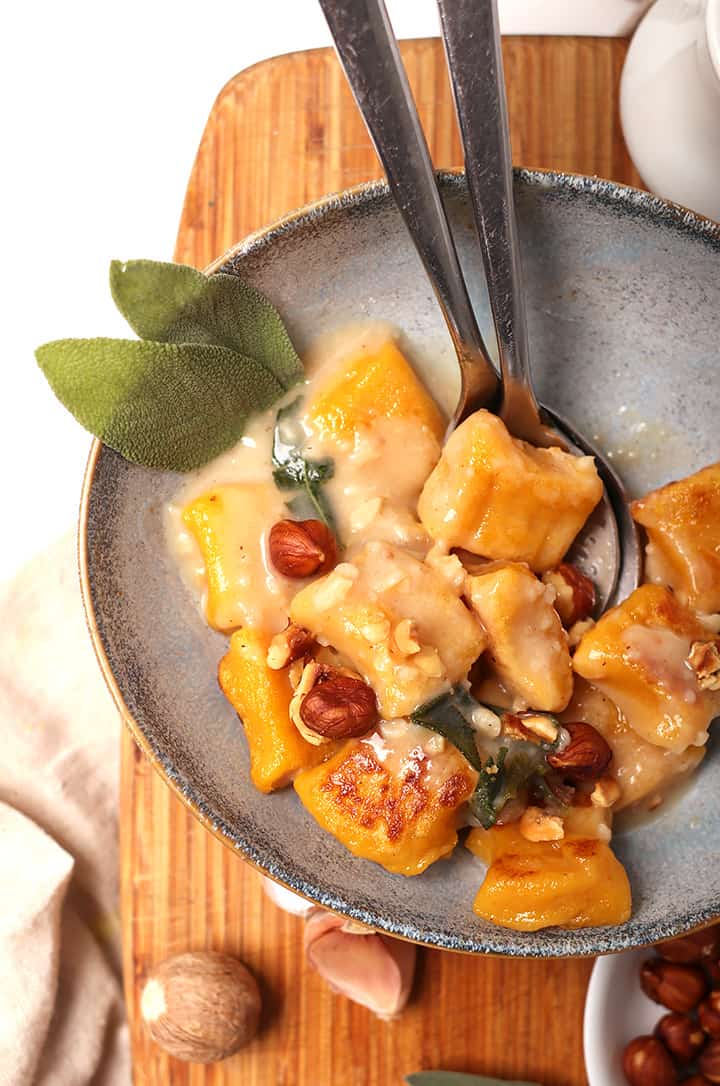 Gnocchi is a great thing to make in advance. To freeze the gnocchi, place it in a single layer on a baking sheet before boiling the dumplings and let them freeze all the way through. Once they are frozen, place the gnocchi in a ziplock bag and store it in the freezer for up to 3 months.

To prepare frozen gnocchi, place it in boiling water straight from the freezer. Frozen gnocchi will take longer to cook but, just like before, look for the first ones to float to the top to know when the gnocchi is done.